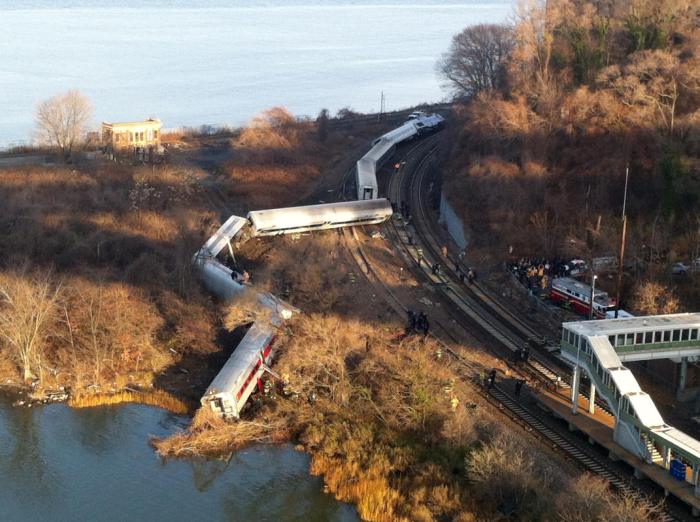 Cars from a Metro-North passenger train are scattered after the train derailed in the Bronx neighborhood of New York, Sunday, Dec. 1, 2013. The Fire Department of New York says there are “multiple injuries” in the train derailment, and 130 firefighters are on the scene. Metropolitan Transportation Authority police say the train derailed near the Spuyten Duyvil station. (AP Photo/Edwin Valero)

A Metro North train derailed along the Hudson River, about 100 feet north of the Spuyten Duyvil station in the Bronx early Sunday.

Four people were killed while sixty-three others were injured in the accident.

The train was travelling to the New York’s Grand Central Station from Poughkeepsie, New York.

Yahoo News reported that Aaron Donovan, a spokesman for the Metropolitan Transportation Authority (MTA), said that the derailment occurred at approximately 7:20 a.m.

In the tragic incident, five of the train’s seven cars were derailed, but none went into the Hudson River.

It is reported that the MTA identified the victims as 54-year-old Donna L. Smith of Newburgh; 58-year-old James G. Lovell of Cold Spring; 59-year-old James M. Ferrari of Montrose; and 35-year-old Ahn Kisook of Queens.